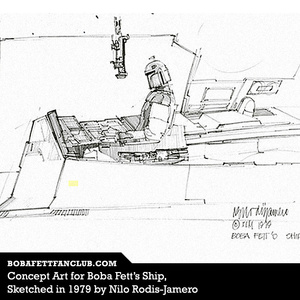 #FettFriday: Concept art for #BobaFett's ship, Slave I, sketched in 1979 by Nilo Rodis-Jamero, who was instrumental in its design.

"Joe Johnston showed me some of the ideas he had for Boba Fett, and I remember asking myself what his spaceship would look like. I remember seeing a radar dish and stopping to sketch it very quickly to see if I could get something out of it. The original design I had was round, but when you looked at it from the side, it became elliptical. For some reason, when I drew it, George thought it was elliptical, so that's what it became. When we were building the ship at ILM, somebody looked at street lamps and pointed out that they look like Boba's ship. So everyone began to think that was where I got the idea for the design."