The Star Wars galaxy is populated by rogues, Rebels, and rabble-rousers. Many carry a hefty price on their heads, whether put there by criminal overlords like Jabba the Hutt or by the iron fist of the Galactic Empire. And where bounties are offered, bounty hunters will be there to claim them: the stealthy and merciless Aurra Sing; the fierce and relentless Bossk; the sly and mercenary Dengar; the calculating and precise 4-LOM; the audacious and deadly Kenix Kil; and the most feared manhunter of them all...Boba Fett! Four tales of life on the run created by a small army of comics luminaries, The Bounty Hunters is a must-read for Star Wars fans, predator and prey alike! Includes the popular — and hard to find — Boba Fett: Twin Engines of Destruction.

Alternate cover $14.98
More from this vendor
Affiliate marketing disclosure
When you make a purchase through clicking on a vendor link at BFFC, we may receive a small commission. We hand pick links for official merchandise to vendors with great reputations with their costs, shipping, and customer service. We are independently run and make our own decisions — nobody tells us what to do. Best of all, there is no extra cost to you. All proceeds go towards our costs to be online. Thanks for your support!

167
Bounty by the Numbers

Use "My Bounty" to track all the Boba Fett collectibles that you have, want and like
↑ Boba Fett merch • Policy ↑
Featured Bounty 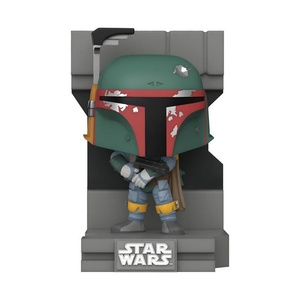