On one version, Boba Fett is included on the cover.

From the blockbuster movie ... nine more Action Figures plus the original twelve! Also introducing BOBA FETT intergalactic bounty hunter. All have moveable arms and legs and authentic STAR WARS costumes. Put them in their own action poses or use them with STAR WARS toys and spaceships.

Despite not yet being in "The Empire Strikes Back" (19800, Boba Fett was already introduced. In 1978, he was already seen on the "Star Wars Holiday Special." 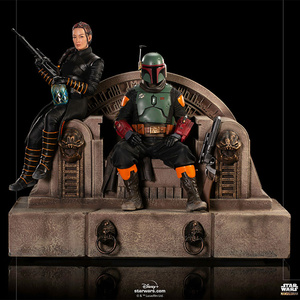