Me and my friend darksilvania made this together as are first one.

The Storyline:
The year is 2002 and a unexpected plague has stricken the entire western part of America, the cities have all wasted to cities of scum, rape and war. The newest infected area is Raccoon City. The population of the Raccoon City is said to be over 100,000. The urban area is divided into several districts, including Uptown, Downtown and the more industrialized Cedar District. What was left of Raccoon City and the surrounding area was searched and categorized thoroughly for any possible survivors and biohazard threats by the U.S. government in early October 2002. By May 2009, the search and categorizing operation ended with no survivors found. But there were small traces of active T and G-virus strains found. The ruins of Raccoon City and twenty miles around it were declared a possible biohazard threat and became a highly-classified, restricted area that only the U.S. government and remaining people could enter. But this story takes place during 2002.

The Rules:
1. You may create any character you want but follow the guide above.

2. You can kill characters you create but you can't kill other people's characters unless they say they have been killed in battle with you.

3. You can have any weapon you want but you can only have what your character could physically carry - otherwise they wouldn't be able to move.

4. Be consistent, eg if someone says they blew up a building, don't suddenly be assaulting it.

5. If you have sustained many wounds you will have to weaken and possibly be killed, healing factors can reduce this.

6. Follow the storyline, sure add a few twists and turns but allow others to see where you want to go so they can help you get there.

Personality:Kindhearted and a sharp shooter, basically all around good guy.
-
"Walter! I caught another one, this one was eating a dog!"

Ron had came in with another infected guy.

"Ok I know there sick but what is going on hear? Don't you think it's a little weird that all these people have a disease we don't know about?"

"Look Walter, I don't really care. All I wanna know is if you wanna come with me to get some bruskie's."

Walter left the building in his uniform and his gun in his socket. He walked in ally ways to avoid getting caught in a crowd of people.

Personality:Always in a strange mood but good at heart to the people he knows."

I linger in the post, even though no one knows me.

Inigami felt the cool night breeze flow through his soft brown hair. "We're nearing the drop point sir." The pilot called back at him.He pulled his helmet over his head and fastened it. He'd been on a helicopter for nearly an hour now. He'd gotten on with his squad back at Umbrella's outpost some 40 or 50 miles from Raccoon City. His squad was supposed to find unique mutations for Umbrella that the lab rats could turn into a super soldier, and if possible find samples of the T or G virus strains. "Get ready commandos!" Inigami shouted over his shoulder. The helicopter set down on the buildings rooftop. It was one that Umbrella had used to sell cosmetics, there was supposed to be a cache in its basement of weapons, health supplies, and food. The entire building had been locked down after the first reports of the infected attacks. So only they would be able to get in, they'd be using it as their own outpost here at ground zero. It was on the south side of Fission St. His wife had worked at a Computer appliance store nearby, before she'd died in the attacks. He jumped down off the chopper and watched as it flew off. Something on one of the other rooftops skittered across and jumped onto the helicopter, seconds later the helicopter was spinning out of control and crashed into a building. Inigami rushed over to the door and Punched in the code the door hissed and air shot out of the crevices as it opened. Inigami turned on his thermal and headed in signaling the others to follow.

Sev is the Master hunter!!! 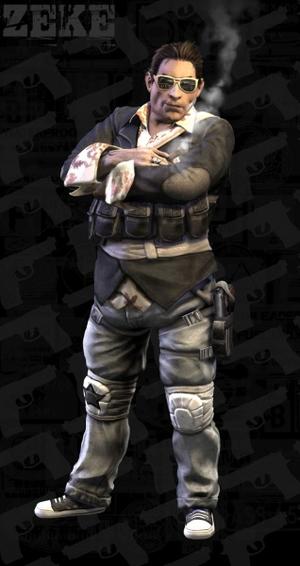 Personality: He is distrustful of the police and the government. He has several "Prison Tattoo" magazines strewn around his place, whether he is an ex-con or simply has an interest in prison and gang culture. Zeke is quite handy with a handgun and he has also shown to have some mechanical engineering skill. He is also a conspiracy theorist that believes that the 'Government' has something to do with every thing.
WOC: (Weapons will be shown later.)

Zeke bit into his pizza and brought up his prison tattoo magazine, he had been there all day eating all the pizza he could eat. "Good bye Bill, thanks for giving me that last pizza it was.... it was good." Zeke walked out of the parlor and fixed his jacket, it was a cold night Zeke could see his own breath and almost slipped a couple of times along the way. Zeke was almost to his house when he herd a women screaming, he sprang to action and followed the voice into an ally. He squinted his eyes and saw a man about to kill the poor women, he reached for his gun and started firing. He reached for the women and said "Hey you, are you okay?", suddenly the women and the man jumped out at him, they were sick. "Infected" Zeke said to himself and shot both in the head. Zeke was quiet, he had just shot two infected in the face, he was a lucky man he "could of been zombie kibble" he murmured to himself. He began to walk back home... to make a blog on what just happened.

Inigami walked down the stairwell somewhat hurriedly as if getting to the cache ooner would get him outta here all the sooner. He grabbed his pistol from its holster and began a sweep of the room, they were on the 2nd floor now any survivors probabally come here and barricaded the stairwell, but that was exactly the problem Inigami's squad hadn't encountered one single survivor. A noise caught his attention and he swung around looking downwards at a women with blood all along her mouth, he ifred two shots without even thinking, she fell to the ground and he noticed she'd been holding an arm in her clutch. "Absolutely disgusting." Inigami muttered to himself. They continued on heading now through the next satirwell, Inigami signaled for his squad to stop. He'd heard a moaning just now. He slowly crept down the stairs and it grew louder. "Akiba hand me a frag" Inigami whispered. The soldier put out his hand, and Inigami picked up the frag. He pulled the pin and tossed it int the room. The bgrenade detonated, takinmg with it five of the infected. The rest came at Inigami and his squad, Inigami pulled his shotgun in time to smck one of the things with the barrel of the gun. He then fired, and guts flew out from the body in a firework style. He opened up on the others taking them down one by one. He checked his ammo. 47 shots, he was good. They headed over to the counter and accessed the computer punching in a code. The wall behind them opened up and a pathway down into the cache became lit up. They rushed down along it, the door they'd just entered through shut down locking itself. An AI projected in the room with them "Proper Identification required" The walls began to glow. Inigami spoke crisply and calmly. "Umbrella Security Commando Terasu Inigami, Identification number 5881-3592-12." The AI smiled and curtsied "Access granted, Welcome commander Inigami" Inigami stepped into the room and flipped the switch next to him on the wall, the lights flickered on. "Hayako, establish a connection with RC Outpost 2-95F" The comando headed over to a terminal "Yes,sir. Right away sir!"

Sev is the Master hunter!!!

Williamlem
Community by the Numbers