Hey all,
I'm building a Boba Fett inspired motorcycle and was hoping for some input from everyone here. The bike started off as a 2015 Harley Forty Eight and is about 90% complete. I chose the Forty Eight because it's low, short, has wide tires for a bike it's size, and looks a mean right from the factory. I've been bombing around town on it for 2 months or so now and with the low aggressive stance I gave it, it really feels like I'm on a little fighter jet tearing through town. Anyway, I have just a couple more cosmetic items to work on before i start the paint and thats where I need the help. The idea I have so far is to stick to the color scheme of Fett's armor in all it's battle worn glory, rust and blaster marks included. I was thinking his family crest would look good on the front fender. The oil tank (right side) and battery cover (left side) would each get the Mandalorian badge and I was thinking the tank would get the gold bars that are above the visor on the left side of his helmet.

Sounds very cool! Seen a few Fett-inspired motorcycles before, so especially curious to see how you're doing it. Maybe share some work-in-progress photos first?

Ok, snapped some photos of the bike with my phone today and here they are. I just picked up a rear fender from the junkyard so I'll be reworking that and putting on the new seat. I'm also getting together with the guy who's doing the paint this weekend to work out some more of the details. As it turns out, he's also a huge Star Wars fan and is excited to do this. He's currently painting a Boba Fett helmet for his photographer friend and his friend wants to do a photo shoot of the bike when it's finished.

On another note, I found a holster for my pistol (real one) that would look pretty cool mounted to the side of the tank. So now I'm kicking that idea around.

This weekend I'll also be working on a bracket to relocate the gauge to the new triple tree.

Got the new fender from the junkyard yesterday. I installed it today then mounted the new seat and outlined the seat onto the fender with a paint pen. I then cut it, refit the seat, cut some more, then smoothed it out. I didn't bother cleaning it up and painting it because that'll be happening soon anyways. So here's some photos. Just got back from the first face to face with my paint guy. We can up with some good ideas for the bike and the original plan I had has changed. I don't want to put out any spoilers so I won't go into what we came up with, but I will say that I now have to build a small LED numeric screen similar to whats on Boba's left chest piece.  I'm excited.

I'll be dropping it off next month before i go on deployment. They're disassembling the whole bike, painting everything, then putting it back together. That only gives me a month to finish all the fabrication and installation.

Just got a digital display like Boba has on his left chest for the bike. I'm going to be installing it on the air filter cover on the side of the bike.

Dropped the bike off at the paint shop on Friday. I'm out for a two month deployment and the bike will be finished when I return.

briandteel, thanks for the updates! How soon until you start on the Boba Fett-inspired paint job?

If I tried to do it myself it'd easily take 6 months because of all my deployments. This is I dropped it off at a paint shop. I'll be gone for about two months, but when I get back it'll be done.

Finally back.I got some paint on the bike now. I don't know how much it shows through but there are green, red and brown patches added to the grey. There's not much though as the frame will be covered quite a bit once everything goes back together. We also figured that the outside of Slave 1 is what would mostly be patched up, not so much the structual frame. So thats what we tried with the bike frame. It's been a while but I have some updates and photos. If you look at one of the first few photos you can see that the speedometer and dummy lights are located on top of the handlebars. I have decided to relocate the speedometer to the left side of the bike mounted on the frame below the gas tank. The dummy lights I wanted to keep up top so I could see if an alarm pops up. To mount the dummy lights to the top of the triple tree I had to build a bracket and this is what I came up with. It will bolt to the bottom of the triple tree like this. It'll look a lot better with some matching paint on it also.

Not sure why all the photos came out rotated 90deg

im out for another deployment so it'll be a few weeks before I can update some more.

About the 90-degree photos, not sure why that happens sometimes with smart phone photos. Sometimes re-saving them after opening on a computer helps. Maybe there's some metadata / EXIF that notes orientation or gets it wrong somehow.

That's awesome. Never thought of that kind of thing (being the Fett-inspired motorcycle) before. I'm sure it will be great. Good luck on your deployment and I'll be looking forward to that update. Great job.

Finally got her finished. On the air filter cover on the right side of the my I installed a working digital display that matches the one Fett has on his chest. 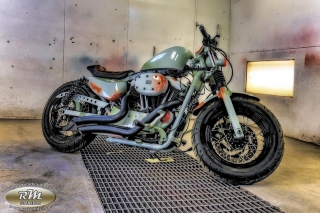 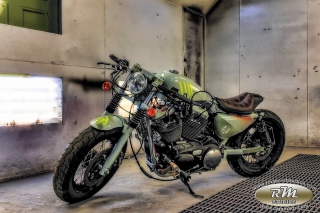 Now all you need is Fett inspired helmet!

Find my art on mahiyanacarudla.deviantart.com :)

That is amazing! Incredible job! Only just now saw this.

X.wing
Community by the Numbers