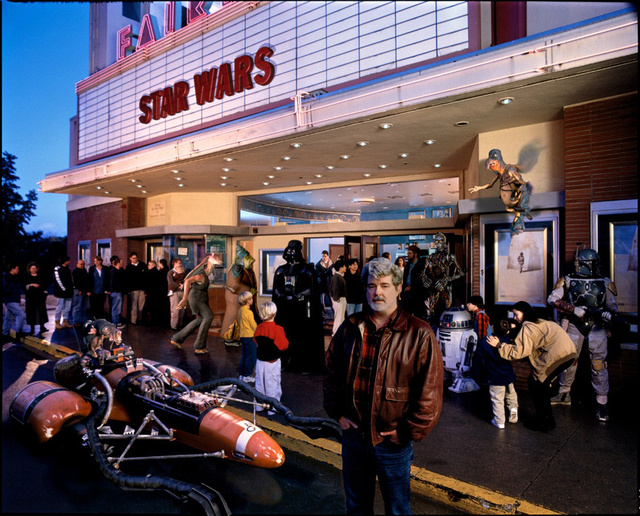 From National Geographic's Instagram caption: "The record weekend for the new Star Wars movie indicate the franchise still I has amazing power and magic. I photographed George Lucas for National Geographic on a story about the globalization of culture, and we needed to portray a global storyteller. Who better than George? I learned a lot on this job as I had to work w folks from Industrial Light and Magic. I had to leave spaces in my photo so the computer generated characters could b dropped in later. Some are really there, like Darth and Boba Fett. But others, like Jar Jar Binks got inserted later. The ILM people were amazing on location as they tracked the angle my lighting to create realism for the CG characters. It was a fascinating look into the world George Lucas has created."

Photo by Joe McNally. Scan via his blog.

Views
647
Image Use Policy
If saving this image for personal use to then re-post, you must include the source, whether it's this website and/or the original source. Our Boba Fett image galleries are a unique resource on the web; it takes a lot of time and effort to curate this all. For the sake of the original sources, it's good to share where something came from and/or who made it. We intentionally credit as much as possible to truly feature and appreciate the work included here. Hopefully you can agree to do that as well. Thank you.