Did you know you can search Boba Fett collectibles by year? Check out our newest feature. 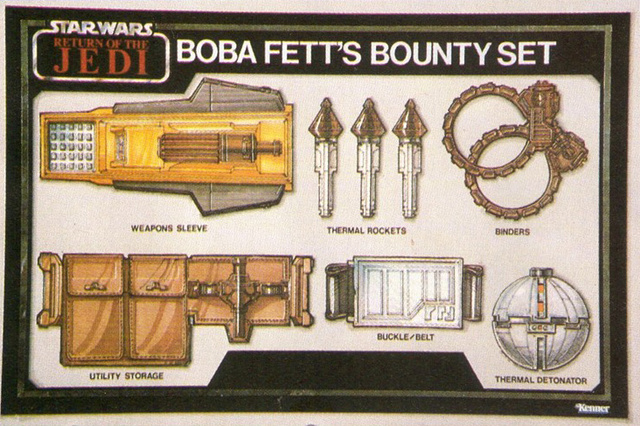 Kenner never made this "role playing" Boba Fett toy set, but it was considered for their "Return of the Jedi" line. This design proposal was made by Mark Boudreaux.

This collectible was featured in "Star Wars: From Concept to Screen to Collectible," the 1992 hardcover book from Steven Sansweet, which informed this caption. They also released a paperback edition in 1999.

Star Wars: From Concept to Screen to Collectible
Added
August 28, 2013

Displayed
533 times
Image Use Policy
If saving this image for personal use to then re-post, you must include the source, whether it's this website and/or the original source. Our Boba Fett image galleries are a unique resource on the web; it takes a lot of time and effort to curate this all. For the sake of the original sources, it's good to share where something came from and/or who made it. We intentionally credit as much as possible to truly feature and appreciate the work included here. Hopefully you can agree to do that as well. Thank you.

Established in 1996, the Boba Fett Fan Club is the premiere destination for fans of the original bounty hunter Boba Fett from Star Wars.
Representing 110,287 fans worldwide, BFFC is the oldest Boba Fett website and most popular Star Wars character website.