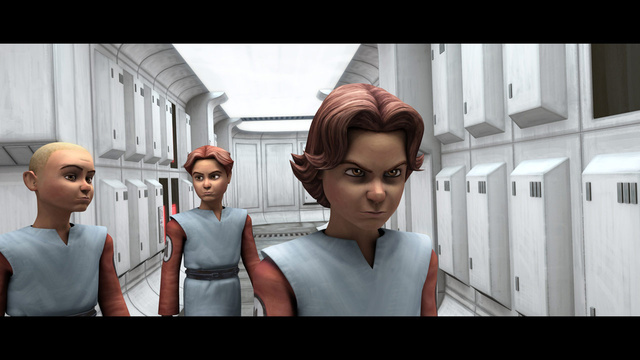 "Clone Sergeant Crasher addresses a class of clone cadets before their frigate docks with the mighty cruiser Endurance. The young clones seem very eager to explore the decks of the warship, though one in particular -- a sullen lad named Lucky -- keeps to himself. As the youth brigade enters the Endurance, a chipper clone cadet named Jax befriends Lucky, keeping the teasing of his noisier brigade-mates at bay."

Caption and screenshot via StarWars.com.

Views
629
Image Use Policy
If saving this image for personal use to then re-post, you must include the source, whether it's this website and/or the original source. Our Boba Fett image galleries are a unique resource on the web; it takes a lot of time and effort to curate this all. For the sake of the original sources, it's good to share where something came from and/or who made it. We intentionally credit as much as possible to truly feature and appreciate the work included here. Hopefully you can agree to do that as well. Thank you.